"Sawubona!!" is a word in Zulu meaning "Welcome to South Africa". Zulu is one of the 11 official languages spoken in South Africa. Sawubona is not just a word but also a feeling you will experience with the first minute of your stay in South Africa. That's what happened to us the first time in this incredible country. And that meant also to come back again and to collect more impressions and experiences.

Said - and done, this time the travel planning / booking was made on our own. And of course our bush camp in the Outer Kruger National Park could not be missing.

Park could not be missing. So first of all we went to Johannesburg with the Emirates Airline and a stop-over in Dubai. Arriving early in the morning, we first took our rental car and drove according to our planned route first to nearby Pretoria, where we had booked an overnight stay at 314 on Clark Guest House. Of course we wanted to see something from Pretoria, after all, we were in the capital of South Africa. As a first goal we had chosen the Fort Klapperkop.
On the way there we could enjoy the beautiful view of the capital, because at this time of the year the 70,000 Jacaranda trees are blooming all over the city - all in purple/mauve colour. What a sight! Then we went to the Voortrekker Monument, a massive granite building on a hill not far from Pretoria and visible from afar. Back in Pretoria we visited the Union Building, the seat of the South African government. In the gardens in front of the building stands a statue of Nelson Mandela, the first black president of the country, almost 10 meters high.

The next morning we continued north - the next destination Tzaneen in the province of Limpopo northwest of the Kruger National Park, known for the many fruit and tea plantations. Our accomodation there, the La Barune Guest House, a really nice location in the quiet part of Aquapark and booked for 2 days. After a good and rich breakfast on the terrace next to the swimming pool we explored the area and first made a tour on the Agatha Road, a 35 km circuit through the impressive landscape. After a stop in Haenertsburg, an old gold mining village, we made a detour to the Debengeni Waterfalls.

The approach to our next destination, the Kruger National Park, was completely relaxed because to our well-functioning navigation device. The Kwa Mbili Game Lodge in the Thornybush Reserve, part of the "Outer Kruger Naional Park" was already known to us from our first trip to South Africa. The welcome at the camp was accordingly warm and our anticipation of the upcoming game drives course great. We had booked the lodge for 3 days, so we were able to observe the wild animals in their natural environment on a total of 6 game drives in the early morning and late in the afternoon. This time we even had the luck to see all so-called "Big Five" (lions, leopards, elephants, buffalos and rhinos) in one day.

Unfortunately, time passed once again too fast. So on to the next station - Durban, the third largest city in Africa. The flight from Kruger Mpumalanga International Airport to Durban took only 1 hour. In Durban, we took our next rental car and drove to our accommodation, the Goble Palms Guest Lodge and Urban Retreat, a beautiful old colonial style villa, located in the quiet suburb of Morningside and booked for 3 days.
Our program included a visit to the Coastline, the city's beautiful and long seafront promenade, and the Moses Mabhida Stadium, built for the 2010 FIFA World Cup. One highlight here was the ride on the "Sky Car", a train leading to an observation deck on the vehicle drives. There you have a nice view over the city and the Indian Ocean.
The next day we actually wanted to do a tour of the Valley of a Thousand Hills, but were stopped by a cycling race. Too bad - so we decided to go ahead and visit the Nelson Mandela Capture Site in Howick. At this point, Mandela was arrested on August 5, 1962 and, as is known, imprisoned after a trial for a total of 27 years. In addition to a small museum, a mighty steel sculpture just out into the sky, consisting of 50 pillars of different heights, looking from afar like an indiscriminate number of steals. However, as you approach the sculpture, the portrait of Nelson Mandela becomes clearly visible. Here is the past South Africa with apartheid still noticeable. A really historic place.
We continued to the Howick Falls, with 95 m altitude quite imposing. Shopped for some souvenirs, still a little detour to Pietermaritzburg and then back to Durban where we spent the last evening eating at Wilson's Warf.

Next morning up to the airport and to our last stop on this trip, to Cape Town. At the airport in Cape Town we got an upgrade for our ordered car, an Audi A3 Cabriolet. What a surprise! First we went to our last accommodation, the Dongola Guest House in Constantia, a winegrowing area behind the Table Mountain, in retrospect one of our best in South Africa. And once again a warm welcome from the hosts Sally and Mike. Then to a good dinner in "The Brasserie" and off to bed.
The next day started with a good breakfast. Then we went to Table Mountain by using a UBER taxi (these are cheap, private taxis). Fortunately, we had previously booked tickets for the ride with the cable car, so we were able to use the "Fast Lane Queue" for ticket holders. Nevertheless, it took almost another hour before we could finally get in. Just the ride up to the mountain was an experience. The cabin of the cable car turns 360 degrees during the ride and so each of the passengers can enjoy the magnificent view of Cape Town. At the top of the plateau we found well developed hiking trails and stunning viewpoints. We stayed there for a while, the panorama and the view down to the city and the individual coastal sections is really amazing.
After a short break in our accommodation, we drove to Bloubergstrand, a suburb of Cape Town about 15 km north. The beach is a popular location for a classic view of Table Mountain across the bay and is one of the world's top kitesurf destinations. Another "Sundowner" on Woodbridge Island, then the day was already over.
A new day, it's pretty rainy. So what to do - Sally from Dongola House recommended a visit to the shopping mall "Canal Walk Mall" in Milnerton, not far away from Cape Town. Spread over several floors and covered with elaborate glass domes and rows, Africa's second largest shopping mall houses over 400 shops for every taste. The domes are copied from former Victorian greenhouses, restaurants and food courts complete the picture. A nice place to leave a lot of money. We were definitely impressed.
As the weather cleared up around noon we decided to drive to Cape Town to the waterfront. Even though we explored this place during our last visit, it is always nice to watch the hustle and bustle there. There were a number of large racing yachts at the pier. As it turned out, they all took part in the "Race of Life", an international boat race with 12 yachts in 227 days and over 6 oceans. And now they stopped in Cape Town.
At this pier is also the office for helicopter charter flights where we had already a sightseeing flight on our last stay. Without thinking twice we booked another round trip, this time the slightly longer route with 30 minutes. It started again at the helipad of the waterfront. A unique view of the city, Table Mountain, the V & A Waterfront with the football stadium, further along the Cape Peninsula with the white beaches of Clifton, Camps Bay and Hout Bay, the Chapman's Peak Drive and back over the wine growing area Constantia to the starting point. Another highlight of our trip!
For dinner we chose the restaurant The Africa Cafe in the city center. Actually you have to book in advance, it is always well visited. We got a seat anyway. The rooms are individually and colorfully decorated and the staff wear traditional Zulu clothing. Here you get a little insight into the cuisine of the African continent. There is also only one menu - a variety of small portions from different regions, but perfectly adequate. Together with typical African Songs of the staff we had a nice evening.
The last day of our journey started gray and rainy again. Nevertheless, we decided to do a little round trip. First we drove to Muizenberg, known for its colorful bathhouses. In itself a nice photo motive, but partly very run down. So on to Hermanus, the well-known place for whale watching. In the large bay there are many viewpoints from which you can watch the animals. It took a while until we discovered any. But you already need the right equipment to take beautiful pictures. Another nice dinner, back in "The Brasserie" and then it was already time packing suitcases.
The return flight via Dubai was completely relaxed and easy thanks to a free seat in our seat row. Unfortunately we could not get an upgrade for our wedding anniversary that day. Pity - then maybe next time.

Of course we did a lot of nice shots again. 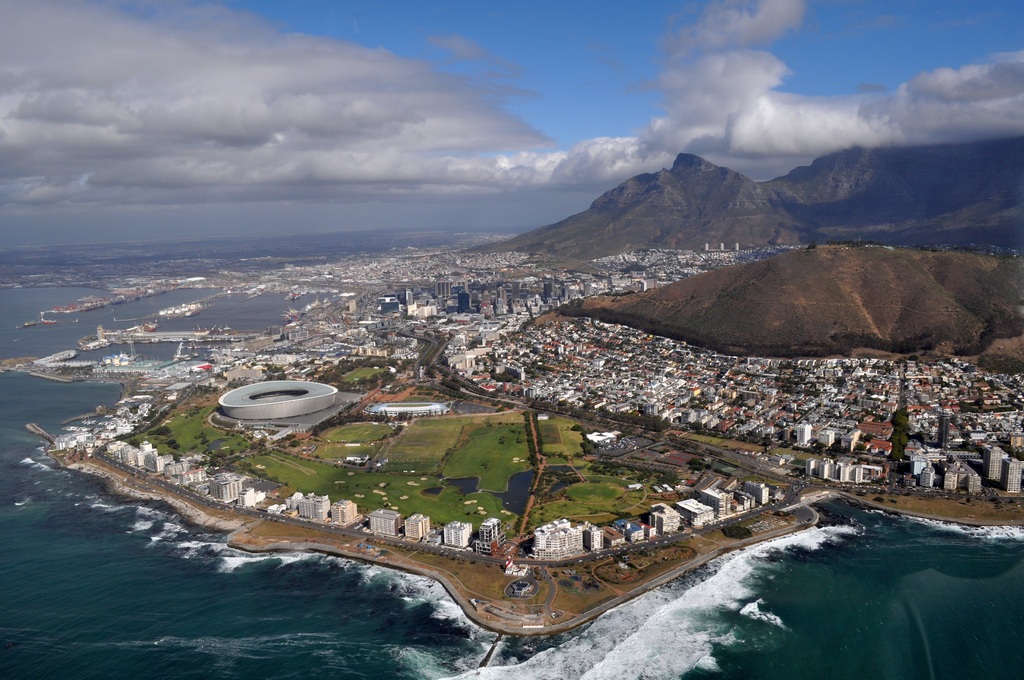